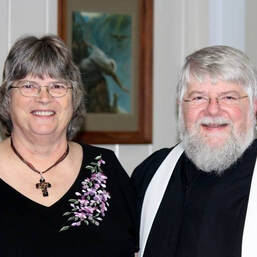 Pastor Greg began his pastoral work on Jan. 1, 2000 and has served the following churches. Leroy, Elm Mott, Moody and Moody Leon United Methodist Churches, all in the Central and South Districts of the Central Texas Conference. Then he was appointed to North Salem UMC in the Central District of the Indiana Conference before arriving to serve Wakarusa UMC in July 2019. He is a second career pastor and completed Course of Study and Advance Course of Study in 2007 at Perkins Theological Seminary, Southern Methodist University, Dallas, Texas. He spent 31 years in the Manufactured, Mobile and Military Housing, Inspections and Codes. He and his wife have been married for 24 years. They have three grown daughters, seven grandchildren and four great grandchildren with a new one on the way. They all live in Indiana and Michigan.

“I grew up in the church, The Seventh Day Adventist. In fact, there were Seventh Day Adventist Clergy dating back to the beginning of the Seventh Day Adventist Church in the early 1800’s in our family history. I had the calling when I was in youth and Pastor Blackburn talked and encouraged me to continue… but I ran, like most youth, I was scared and went to Elkhart Institute of Technology.”
“I was baptized when I was a youth, but I really didn’t get to know Jesus Christ until I met Terri, my wife, and after knowing her a couple of years, I asked her to marry me. We decided to start our new married life together with God, Jesus, Holy Spirit, family and church in the center of our lives. Terri was baptized and I rededicated my life to Jesus Christ at Lakeview United Methodist Church in Waco, Texas.”
“Terri and I have walked with Christ every day and have not regretted it for one moment. We have gone through many trying times over the last 24 years, but we know God never left our side and helped us through those times. God is good!”

“It was while I was attending my home church, Cogdell United Methodist Church in Waco, Texas, that God began to direct my life into full-time ministry.”
“I was working as a manager for RADCO INC and was happy and fulfilled in my position, I loved what I did. But I really started to grow in my faith by being involved in small church groups and a member of several committees. I began reading books about evangelism and began feeling a call from God once more.”
“At first, I flatly resisted any thought of a change, but shortly it became clear to me that God wanted me in the ministry to preach. At the same time, I was the Sunday School teacher of the gray hair bunch in the parlor. Only one not retired and not on Social Security in the class. They were the first that recognized that God was calling me other than my wife.”
“Dr. Steve Langford was my pastor at Cogdell at the time. He called me into his office and told me that God was calling me to preach. It wasn’t long after that, I found myself more than a Worship Leader and preached one Sunday. Shortly after that I took a course to become a lay preacher and was joyfully filled with the Spirit to go into the ministry. The instructor told me, “God’s not done with you yet!””
“It was a short time later I was assigned a mentor to explore my calling and the United Methodist Church. I did wonder at that time what my life would look like if I had answered God’s call as a youth. But when I look back, I know God never gave up on me and walked beside me all those years.”
“I am truly blessed to be the pastor of Wakarusa United Methodist Church.”
​
Powered by