Since 1851, when the Baugo Mission began holding services in a barn, this church has been a part of the Wakarusa community.  Through the years, the church moved downtown into the heart of the community.  Its buildings grew and changed, and but its message stayed the same—to be witnesses for Christ to the glory of God. 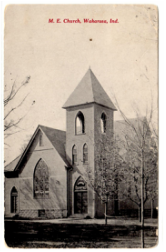